My body used to be 25% fat, something I couldn’t hide by sucking in my stomach and wearing baggy clothes. 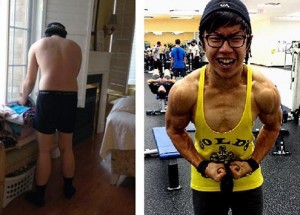 At my peak weight I weighed in at 180 pounds and as the weight accumulated I felt that I had to overcompensate in other areas of my life.

I would be extra accommodating towards others in an effort to make up for what I thought I lacked due to my weight.  I opened the doors to abuse, and let others take advantage of me. Eventually, the psychological and physical toll was too much to bear, and at my young age I didn’t want to waste any more time feeling the way I did.

I had tried and failed many times before, so this time I did my research and planned ahead. I educated myself on weight loss, and picked up great books like “Good Calories, Bad Calories” by Gary Taubes and “The Ketogenic Diet” by Lyle McDonald. Beginning a ketogenic diet was difficult, and I was often on the receiving end of many strange looks when others found out my plan for losing fat was to eat tons of it! My old diet consisted of mostly carbs, so I had to make major changes in my eating habits and find enough fatty foods to fill my macro-nutrient needs. Regardless of the difficulties, I started seeing results after just a week! Though it was mostly a loss of water weight, it was a great boost to help keep me on track.

I was thankful to have my brother on the same journey with me. We did the ketogenic diet together, and became each others support system. We compared results and challenged each other which kept me motivated. This was my fourth attempt at losing weight, and I was not going to allow myself to fail. Finding the Low Carb Grocery was a massive help. My cravings for noodles and pasta loomed over me daily until I found Shirataki noodles. My love for stirfry has been reborn! The Low Carb grocery has a low carb substitute for almost everything. My favourite discovery is the Walden Farms brand.

It took a year and a half, but I’m currently at 140 pounds and I’m not done yet! The next step in my journey is to gain muscle mass by following a bodybuilding diet plan and weight lifting program.

The best thing I learned about health on my journey is that anyone can achieve it. I, like many other people, used to blame my excess weight on a “slow metabolism”. After sitting down and actually tracking what I put in my body, I realized that I was not at any disadvantage compared to other people. I saw that I simply ate too much. After recognizing this, I realized that achieving great health isn’t something that only the genetically blessed can do.

Our bodies want to be healthy and given the right environment, anyone can attain great health. We just need to ditch the excuses and own up for our actions. Breaking the addiction to sugar will make your life a whole lot easier!