Peppers might be the most versatile ingredient around. Not only can it be the centerpiece of a delicious meal but it can also add hints of flavour and heat to run-of-the-mill dishes. Additionally, they have a great texture and are easy to prepare and cook.

With respect to peppers, most people aren’t completely aware of how complex some of their flavours are and how to best deploy them as an ingredient. Just as important, many bite into a pepper thinking it’s a moderately hot jalapeno or even a sweet bell pepper only to discover it’s actually a scotch bonnet. Trust us, it happens.

We’re here to help pepper fans discover new depths to their enjoyment of this timeless food that can be used in a multitude of ways. Let’s start by breaking down the different type of peppers and how their flavour profiles differ. Next, we’ll explore how someone can gauge the heat so that there are no surprises. Lastly, we’re going to share some amazing pepper-forward recipes with ingredients from The Low Carb Grocery.

We’ll help get one step closer to becoming a pepper connoisseur.

The Origins of Hot Peppers

Peppers have been around since before 7500 BC. Botanists consider them to be the first self-populating plant to ever be cultivated in Mexico, and Christopher Columbus is believed to be one of the first Europeans to encounter a pepper. Today, they are grown in many parts of the world with the largest amount being produced in Asia.

Essentially, there are five varieties of Chile peppers derived from the Capsicum herb:

Across the different varieties, peppers come in a ton of shapes and sizes and range from sweet to hot. The real way to tell them apart is by how they taste—raw and cooked—and their potency with respect to heat.

The right pepper for your pasta primavera might not be the right one for your sausage dish and you might not want to use De Arbol for the stuffed peppers you plan to serve your children.

People tend to lump peppers into one of two categories: sweet or hot. This doesn’t acknowledge the depths of flavour exhibited by peppers.

Here are the unique flavour profiles for some of the more popular types:

Ancho, which is a dried poblano, has a subtle fruity flavour with a hint of plum and a touch of bitterness that hits that back of your throat.

De Arbol has an earthy flavour with an undertone of nuttiness. This is a great addition to your favourite salsa recipe.

Habanero are a nice mix of intense heat and fruitiness. Its natural flavour is reminiscent of tropical fruits like papaya but with a more berry-like finish.

Scotch Bonnet, named for its resemblance to a bonnet popularized by Scottish fashions, is like a habanero but with an uptick in sweetness and slightly less heat. Many find it to taste like a mixture of tomatoes, apples and cherries.

We’ll group Tabasco and Thai Chiles together as they are the foundation of two iconic hot sauces, one obviously being Tabasco Sauce and the other is Sriracha. They both have a nice acidic taste which cuts through the heat and mix well with ingredients like sugar, garlic and salt.

Flavour is key but people gravitate to peppers for that intense heat.

In the case of Scotch Bonnets and Ghost Peppers, a little bit can transform a mild-mannered dish into something full of natural heat and spice.

How to Gauge Heat

The best way to determine heat is by consulting the Scoville scale, which measures the heat of peppers by assigning Scoville Heat Units (SHU). This method can also measure the heat of hot sauces that feature peppers.

At the bottom of the scale is the reliable bell pepper. This isn’t surprising as it is a common food for young children and is known more for its unique sweetness. Here is how the rest of the scale breaks down. All units are measured in SHU: 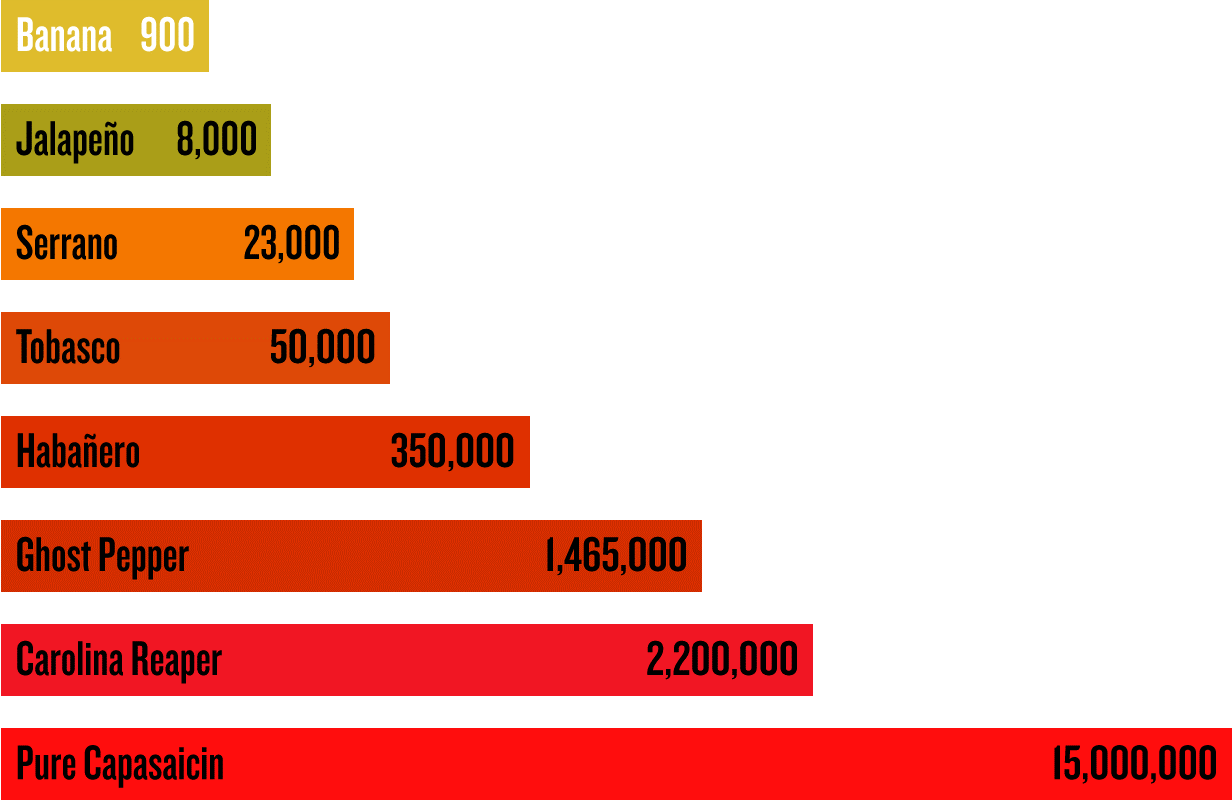 There are a couple higher levels which cover standard pepper spray and Pure Capsaicin but those should never be consumed even on a dare.

It’s only the 0-800 SHU level that are of considered mild to moderately hot. Everything else ranges up to incredibly intense heat and should only be eaten by people who are familiar with this type of heat and know that they can handle it.

Now that you have a better idea of the heat and flavour profiles associated with certain hot pepper, it’s time to put on your apron and start cooking some hearty and satisfying meals featuring hot peppers. These recipes can be enjoyed by everyone including those adhering to a low carb diet.

This recipe is a favourite of people on Keto and Paleo diets. It has nice heat, intense flavour and is easy to make.

To make, chop all the vegetables and deseed the habanero peppers. Before continuing, wash your hands and be careful not to touch your mouth or eyes. Next, add the chicken to a slow cooker or crockpot and then top with all other ingredients besides the green onions. Give it a good mix and cook on low for eight hours or on high for four to five hours. During the last hour, add the green onion.

This is an amazing chili recipe that has great heat and depth of flavour. All you need is 5 lbs of trimmed top sirloin, 2 tsp. of salt, ½ tsp. of black pepper, 3 tbsp. of extra virgin olive oil, 1 medium onion, 4 garlic cloves, 3 tbsp. of chili powder, 14 ½ oz. of red tomatoes with green chiles and 6 fl. oz. of red table wine.

Heat 1 ½ of tsp. of oil in a Dutch oven over high heat. Add the beef and sear it on all sides, which takes about one minute per side. Once cooked, transfer beef to a bowl.

Chop the onion and toss into the heated Dutch oven with 1 ½ teaspoons of oil. Finely mince the garlic and then cook with the onion until it’s fragrant and lightly browned. Mix in chili powder, tomatoes with green chiles, wine and bring everything to a simmer. Add the beef (and the juices in the bowl) and then cover the Dutch oven and cover and bake for 2 ½ hours. Give it a good stir about halfway through cooking.

You can even kick it up a notch by adding a small amount of either jalapenos or habanero or by adding some Tabasco Sauce to the finished dish.

Peppers are an amazing ingredient that can be added to a ton of low carb dishes, including salads, stews, pastas or an array of sauces. Sweet and hot peppers can add a delicious crunch or touch of heat to any dish. Even a few splashes of a pepper-forward hot sauce can elevate a plate of noodles into something extra savoury.

Be sure to explore the lineup of Hot Sauces available at The Low Carb Grocery. There are some extraordinary flavours, including garlic, Caribbean flair or lime pepper.